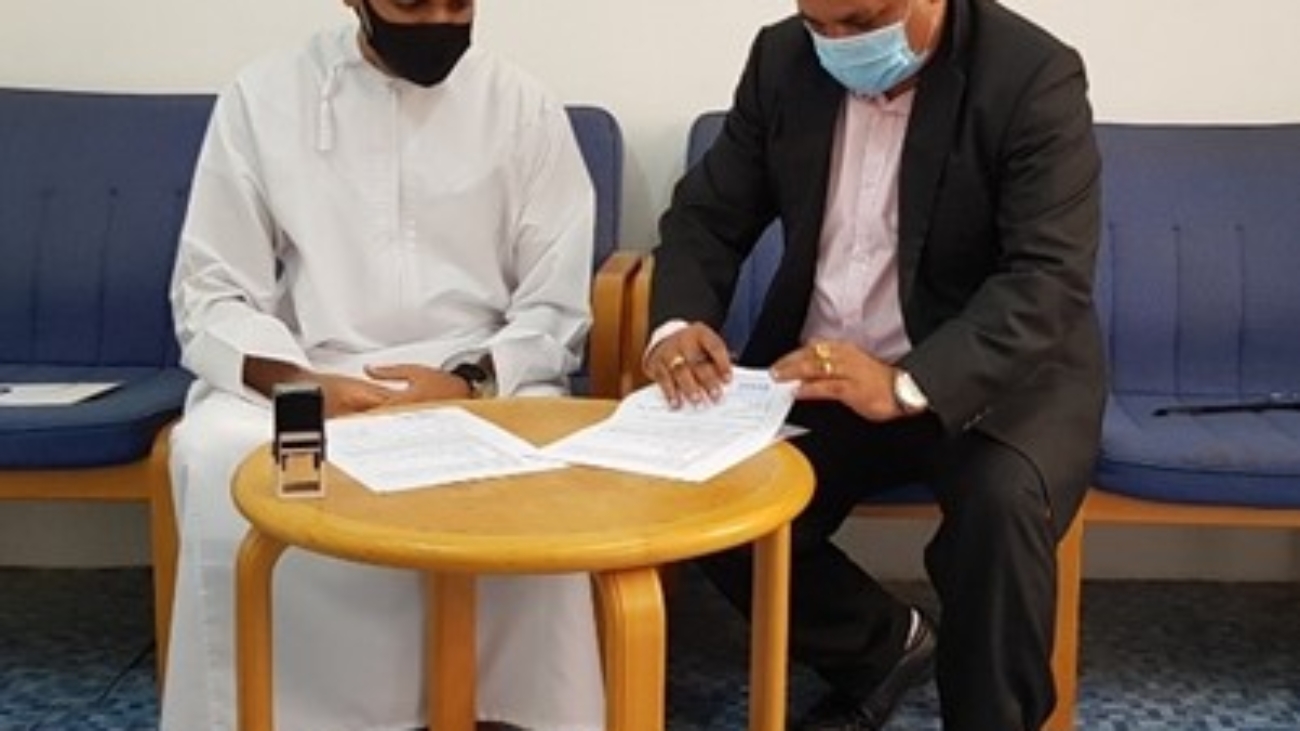 Wakud International LLC (Wakud) has signed a partnership agreement with Modern Arabian Projects LLC (Modern Arabian) for the collection of used cooking oils in Oman for conversion into biodiesel.

Modern Arabian has been collecting used cooking oils in the Sultanate for over 14 years and is the largest collector covering all of the countries. Wakud is building a biofuels plant in Khazaen Economic City which can convert used cooking oils into biodiesel.

“We are humbled to have Modern Arabian as a partner. There has recently been a misconception that commercial establishments throw away their used cooking oil. This is not true and its thanks to the silent work of Modern Arabian which has contributed significantly to maintaining Oman’s natural environment by collecting this feedstock for over a decade”.

“We are excited to work with Wakud on this innovative solution to create a circular economy within Oman. We have the necessary infrastructure and feedstock to help Wakud with their mission of building a biofuels hub in Oman”.

Earlier this year, Wakud announced its plans to build a biofuel refinery in Khazaen Economic City. The project is a joint venture with Green Fuels, a biofuels technology company based in the United Kingdom. Wakud is also one of the strategic projects that is supported by the Vision 2040 Implementation and Follow-up Support Unit (ISFU) as well as EJAAD. Wakud’s mission is to develop a sustainable biofuels ecosystem in Oman and they are aiming to be operational by Q2 2021.

It was a typical English rainy day in 2009, a friend of mine had offered to show me around a biodiesel company which he worked for in central London. As we toured their small facility, I had to ask the same question again; “So, you take used cooking oil from restaurants and you convert it into a sustainable diesel which can be used in a vehicle’s engine and it burns cleaner than petro-diesel?”. “Yes, that’s correct!” was the answer (again). I was dumbfounded at the simplicity of the concept and a little surprised that this was the first I had heard of biofuels.

The following year, I moved back to Oman and immediately looked at what restaurants were doing with their used cooking oil and noticed that it was being collected and dumped, or worse, put back into the food chain (which is carcinogenic). I then set up a logistics company with two friends which focused on the collection of used cooking oil for conversion to biodiesel and we started with our first customer in Oman, McDonald’s. Since 2011 we’ve been sending all of our used cooking oil to biodiesel plants in Europe, as there is currently no facility in Oman. We are proud to say that today, all used cooking oils collected from restaurants and commercial establishments in Oman are being recycled into biofuels, albeit outside of the country.

In 2018, Oman announced that its subsidy on fuel was to be removed and a formula-based pricing system was adopted. This was a pivotal moment for us as it finally made commercial sense to build a refining plant and use biodiesel in Oman to create a textbook circular economy. This is when we reached out to the team at Green Fuels in the UK, a pioneer in sustainable fuels since 2003.

Earlier this year, we incorporated Wakud with a mission of creating a biofuels ecosystem in Oman. Wakud, is a joint venture between an Omani entrepreneur Maher Al Habsi, myself, and Green Fuels. Wakud will play a leading role in the energy transition in Oman and the Arabian Gulf. We will shortly be shipping a state-of-the-art FuelMatic GSX20 biorefinery from the UK for installation and commissioning at its site in Khazaen Economic City, about 70 kilometres west of Muscat. The plant has the capacity to process 20 tonnes per day of used cooking oil (UCO), collected from restaurants and food processing establishments, into European EN14214 standard biodiesel for local consumption as road fuel.

Selecting Green Fuels as our refining technology partner was an easy decision given our similar belief that biodiesel has potential beyond road fuel with sustainable aviation and marine fuel as future areas for growth. Green Fuels have developed a strategy accordingly, starting with the founding of its sister company, Green Fuels Research (GFR).

Among several proprietary advanced biofuels processes that GFR has developed is SABR (sustainable aviation through biofuels refining), which converts biodiesel into biokerosene (jet fuel) and sustainable marine fuel, both drop-in blend fuels which require no modification to aero or marine engines. These waste-derived fuels, apart from being verifiably sustainable, are the shortest, least costly route to decarbonisation of air and marine transport, which together account for 5% of global carbon emissions.

Moving goods by sea is efficient on a purely commercial, tonne-per-kilometre basis, but the volume of marine traffic means that this sector accounts for around 3% of CO2 emissions. Efficiencies in vessel design are possible but ships are expensive, long-lived assets therefore it will take a long time to upgrade the world’s fleet. Electrification is currently not a viable option for large ships on long routes and other alternative propulsion systems are prohibitively costly. Most ships today use marine diesel or heavy fuel oil and substituting these with sustainable, liquid alternatives will make an important contribution to decarbonisation.

As for aviation, the sector generates around 2% of global carbon emissions and consumed 360 million tons of fuel in 2019, with only a miniscule amount of sustainable fuel used. There is, therefore, a pressing need to transition and decarbonise this sector. Aviation is a key application for sustainable fuels because the energy needed to move a large airliner long distances can only be supplied by liquid fuel. As with ships, no current battery or alternative propulsion system comes close to delivering the required energy density, and will require billions in R&D investment and take years, possibly decades, to become commercially viable, which itself is not guaranteed in two understandably risk-averse sectors. Thus, proven, drop-in, liquid sustainable fuels are demonstrably the shortest route to decarbonisation.

Our plant in Oman is the first step towards building an integrated biodiesel and sustainable aviation/marine fuel value chain in Oman, and eventually throughout the Gulf, and will thus establish the Sultanate as the standard bearer in sustainable development, advanced biofuels production and technological innovation in the region. We want to create a biofuel ecosystem in Oman and will achieve this via knowledge transfer (we will host internships at our plant and at Green Fuels), and by collaborating with Omani SMEs to explore other avenues of feedstock for biofuels such as fish oils, fruits oils, algae and more.

The last decade has seen unprecedented disruption in the energy sector and a profound energy transformation as the global trend shifts from fossil fuels to renewable energy. The recent oil price crash has accelerated the requirement for increased diversification in the energy sector, in alignment with key themes of Oman’s Vision 2040. Biofuels will play a role in Oman’s energy transition and Wakud aims to lead the way on biofuels and to catalyse the sector in Oman.

Khazaen Economic City is continuing to attract investments as Oman is fast emerging as a promising market in the region. One of the latest innovative projects to select Khazaen as the preferred location is Wakud who will set up a facility for recycling waste cooking oil into biofuels.

“Project will optimize the use of local resources, boost national economy and encourage sustainability practices”

A lease agreement was signed between Khazaen represented by its CEO Mr. Khalid Al Balushi and Wakud represented by its Chairman Mr. Talal Hasan. This innovative and environmentally sustainable project is supported by the Implementation Support and Follow-up Unit (ISFU) as well as ‘EJAAD’. The project will be implemented as joint venture in partnership with Green Fuels, a UK based biofuels company. Green Fuels is a pioneer in renewable fuels founded in 2003 and has supplied biofuel equipment with aggregate capacity equating to $500bn in fuel sales to customers in more than 80 countries.

Commenting on the signing of this agreement, Khalid  Al Balushi, said: “We are pleased to sign lease agreement for this unique and innovative project that will contribute positively towards the growth of our local economy. Wakud will set up a state-of-the-art bio-diesel plant. The aim behind the establishment of this plant is to optimize the utilization of untapped potential resources and contribute towards Oman’s economic diversification”.

“The establishment of this vital project in Khazaen is testimony that Khazaen has become an attractive and preferred destination for local and foreign investors, thanks to its strategic location and connectivity with main roads and major ports. As well Khazaen has recently rolled out a package of incentives to stimulate further investments despite the challenges posed by the COVID-19 pandemic. These incentives include exemption from rental fees for certain periods and waiver from some administrative fees,’’ he added.

“At Khazaen Economic City we always align our plans to attract and promote investments along with the government’s plans to establish projects that contribute to the national economic growth, encourage use of local resources to manufacture value-added products in addition to stimulating economic diversification initiatives” he asserted.

Talal Hasan, Chairman, Wakud, said, ” We are excited to announce our partnership with Khazaen to build our state-of-the-art bio-diesel facility within Oman’s most ambitious development project. We will soon start construction work, and it is expected that the plant will be operational in the 1st  quarter of 2021.”

Maher Al Habsi, CEO of Wakud, said, “We intend to collaborate with all interested parties and stakeholders to create a biofuel hub in Oman centered around our bio-diesel project with Green Fuels in Khazaen”.

The bio-diesel plant is one of the key strategic projects that were supported by the Implementation and Follow-up Support Unit “ISFU”. The project has been selected based on specific criteria that included having a strategic partner, enhancing the added value, achieving sustainability in economic diversification, and promoting the culture of innovation and  sustainability in the Sultanate. The company aims to be a regional leader in biofuels to create positive impact in the region and to enhance the biofuels ecosystem in the country